Ok.  I have a few Calendar Routine issues.  I can get a little cranky when the conversation rolls around to this topic.  For years I have railed against the calendar in ANY classroom being only filled up until today’s date. A calendar is a tool. Used to help you organize what is coming up more than it is as a record of what is past.  You can argue against any of the points I may raise later, but in this case, if you do nothing else this year, fill in the rest of your calendar. Please. 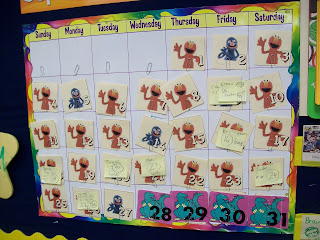 That being said, an amazing conversation sprung up on #Kinderchat over a year ago, debating the usefulness of a traditional calendar routine, and instead trying to think of the calendar as a tool, not a routine.  Of course, kindred spirits were discovered in Kassia and Amy,  links to NAEYC articles Days to My Birthday and Good Intentions Gone Awry  to mull over, excerpts from Jessica Shumway’s book Number Sense Routines and Kassia’s Math Exchanges to read, and best of all, last summer,  building a year long calendar to try out for real.  One huge long, linear, write-on-it continuous one-day-leads-into-the-next calendar.

The boring part of this post - the building of it, is not important. I taped them all together, cutting and  pasting so that there were never any empty days at the end of one month. I fussed about linear over vertical, permanently on the wall as Amy did, or mounted on a Science Backboard to fold away as Kassia contemplated,  or just leaving it as a calendar to flip though as Patty did.  How you do it is not as important as just doing it.  I ended up choosing what was just right for me. 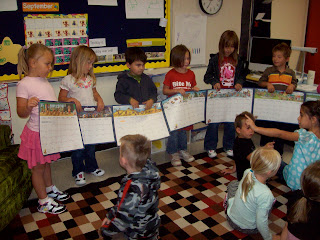 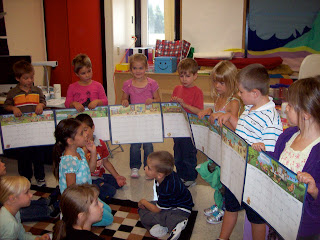 So, September last year.  Just to make sure I was really ready, we started the year with the usual month calendar.  And used the yearly calendar whenever we could. How Big is a Kindergarten Year? was our question.  We built a song around it, focused on birthdays. Because every conversation about time came down to a conversation about birthdays. Kids wrote on the calendar, putting in important dates.  We held up the big calendar and counted the months.  Over, and over and over.  Never assuming that there are 12 of them.

September was a flurry of recording big events (ok, just birthdays. I told you.  Mom’s birthdays, pet’s birthdays, do bug's have birthdays? You name it. ) A clear understanding of what is important to a five year old emerges.  One K mentions Halloween.  No one cares about the calendar. They don’t care WHEN Halloween is, they just know it is amazing - what will you wear, what candy is best - it takes time for the conversation to float to the when of it.  But then, ready for them is a visual idea of just how soon it is!!  It is right near the beginning of our Kindergarten year!!!

Boom.  The conversation explodes into Traditional Holidays, something I do very little of : )  So Christmas is here? Because of the picture? Hey look at the pictures at the top!!  Easter is kinda a long way off . . . My birthday is before that.  Hey, what about Valentines?  Oh, I said.  It is close to 100 Day (Psssst. Nobody cared about 100 Day. Till Later. Till it was relevant). My birthday is in the winter.  How many months until???? becomes the most important question we have.

And on other days? Nothing.  Everyday is not a treasure chest of rich discussion.  But a year long calendar invites it. Is waiting for that moment.

We dump the monthly calendar and we build a this week pocket collection of stuff, because it seemed like some things repeated on a certain day in school. School lends itself to a rhythm of routine that is cosy, comforting, and predictable.   The morning announcements has lots of information to be recorded. Let’s compare to what we did last week, will it happen next week? Is it a once a year thing? What season did it happen in? When was that again? Hey wait, I know it was a Wednesday, will it be on Wednesday again? Can we leave this up for next week? 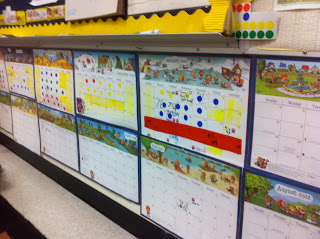 Did we sing Days of the Week songs? Sometimes. It worked for some that were wondering. Plus some taught the others the song from PreSchool. But better was asking the kids who already knew the days of the week.  How do you know it is a Monday? “Because of the M.  But Tuesday is tough - I mix it up with the other one.”  Did we sing Months of the Year? Nope.  We talked more about the seasons - we live in Canada after all, weather matters here : )

The Year Long Calendar becomes a living document.  It is unfolded, folded like an accordion,  stapled to the wall, pulled down, flopped over the big table to check for stuff. Color coded stickers are used to record Days in School, but not until some k’s big sister mentioned 100 day.  We go back and figure it out.  We cut it into seasons and tape it back together. It lays forgotten, then is reborn when a K remembers, oh the Calendar is a great tool for figuring THAT out.

It is a tool. It is not a routine, or a chant. It is not a set amount of time spent everyday settling the class into the routine of the day.  It matters. Because it is relevant to the kids when they need it.

So. I am hooked. While I believe in the pedagogy, the research, and my own belief in the developmentally appropriate power of this, it is not for those reasons that I am currently building my new Year Long Calendar for my new crew. Or that the extensions for it are huge in my head right now, like the concept of visual timeline that we build through the year - maybe wrapping around the room.

It is because my old one ended up tattered, worn and loved.  At the end of the year, kids could pick a something from the room to keep.  The Calendar was the first thing to get picked.  Over the glitter markers I never used. Over the giant cardboard truck, over the big books we had made. And there was a sigh from many that they could not have it.

It is because the little weed who got it looked at me and whispered, “It is like I get to keep Kindergarten!”

A calendar routine that can do that? Yep.
Posted by Mardelle Sauerborn at 14:23 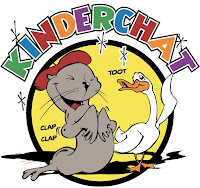 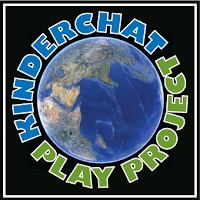